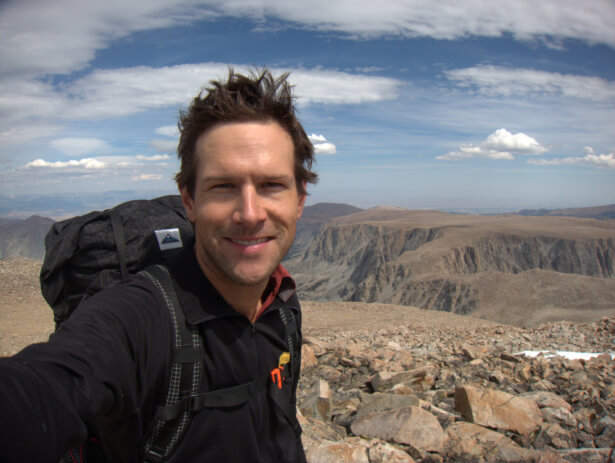 Andrew Skurka is an accomplished adventure athlete, known for his solo ultra-long-distance backpacking trips.  In total he has traveled by foot, ski and raft over 30,000 miles.  He has been named “Adventurer of the year” by Outside Magazine and National Geographic Adventure and “Person of the year” by Backpacker magazine.  And he’s also an ultra-runner with top 3 finishes in a couple of the big 100 mile races.

You’ve likely heard of the Appalachian Trail (commonly called the A.T.), a 2,200 mile trail stretching from Georgia to Maine.  It’s considered the granddaddy of long distance trails and quite an impressive feat if you can hike the entire thing.  Andrew knocked that one off just for fun one summer during college.  And he loved it.  It was at that moment that he knew he was hooked.

But always seeking a greater challenge to push the envelope, he later hiked a 7,800 mile Sea to Sea trail connecting the Atlantic and Pacific Oceans across the northern United States.  That’s the equivalent of doing the entire A.T. three times over and then throwing on another 1,200 miles for good measure.  What’s even more amazing is that this incredible accomplishment wasn’t the culmination of a long hiking career, but rather, just the beginning of it.

Never wanting to stay too long in his comfort zone, he would continue to discover and conquer even bigger challenges. When marked trails became too boring, he bushwhacked his way in the untouched backcountry.  When the weather became too comfortable, he moved his expeditions to regions with sub-zero temperatures.  And when hiking wasn’t enough, he added skiing and rafting to the mix.

You might be wondering how in the world someone can balance these multi-month expeditions with a career.  The answer is simple.  These adventures are his career.  He’s figured out how to monetize his passion and feels anyone can do the same if you’re entrepreneurial and resourceful enough.

It was in the beautiful Blue Ridge Mountains over the summer during college when he was first exposed to people who were living life much more spontaneously and pursuing happiness above everything else.  Life was about climbing mountains and running rapids, not about pursuing careers and accumulating wealth.  That was when he had his first aha moment.  That’s when the tired cliché “life is short” came into sharp focus.

So instead of caving into the peer pressure and following the herd, he decided to follow his heart.  And he’s been following it ever since.  Have you ever felt such joy and pleasure about something that you’d be willing to risk your life for it?  Very few of us have.  Andrew Skurka has.