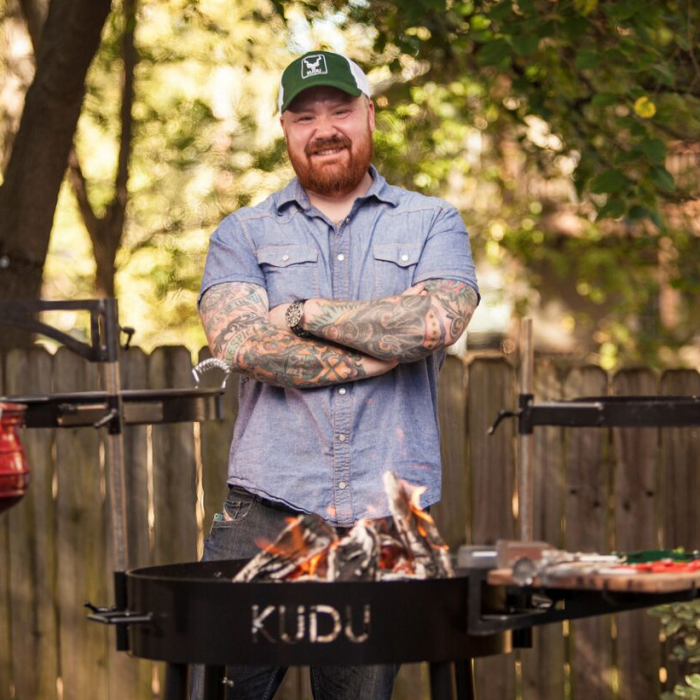 Kevin Gillespie is a chef, author and media celebrity.  He owns two of Georgia’s hottest restaurants: Gunshow and Revival.  Gunshow has been on GQ’s list of “12 Most Outstanding Restaurants”.  In 2015 he was a semi-finalist for the James Beard Best Chef in the Southeast award.  He was also a semi-finalist for the James Beard Rising Star Chef of the Year award.  He is the author of two cookbooks: Fire in my Belly and Pure Pork Awesomeness.  He was a finalist on the sixth season of Bravo’s Top Chef cooking show and was voted the Fan Favorite for the season.

Some kids watch cartoons on TV.  Others watch sports.  But on most days you could find the young Kevin Gillespie glued to the TV watching any number of cooking shows.  There was something mesmerizing watching the chefs work their magic in the kitchen.  His passion for cooking only grew more intense through the years to the point where he recognized that this was more than just a passion – it was a calling.  A calling so strong that he was able to turn down one of the most prestigious universities in the world – M.I.T.  Had he listened to his parents or his friends or his teachers, he’d probably be a nuclear engineer today.  But fortunately he had the good sense to turn inward and listen to his heart.  And that’s how he knew that the only engineering he’d be doing in the future was in the kitchen.

The restaurant Kevin Gillespie was running at the time – Woodfire Grill – was struggling to fill seats and had only a month’s worth of cash left in the bank when he got that auspicious call from one of the producers of Top Chef.  He wasn’t really seeking the spotlight but he decided to throw caution to the wind and give it a shot.  His well-received appearance on the 6th season of Top Chef would turn his restaurant, his career and his life around.

Kevin was voted the fan favorite on the show from that season which soon translated into his being a fan favorite in Atlanta’s restaurant scene.  Woodfire Grill went from having half empty dining rooms to being booked solid months in advance.  Without a doubt, his celebrity status helped fill seats but the show did something for Kevin which was much more impactful.  Without the use of cookbooks or any lifelines, he had to rely entirely on his gut instincts to create recipes on the fly.  He learned how to cook with passion for the very first time in his career which allowed his true personality to surface in his unique culinary inventions.

Gunshow is a restaurant unlike any other.  Describing it as a Brazilian churrascaria-style steakhouse meets Chinese dim sum isn’t quite doing it justice.   In fact, it’s just about impossible to pin down its menu since there is no menu. The food options change on a daily basis and are entirely up to the whims of the chefs.  Whatever they feel inspired by is what you’ll find on the plate that evening.  This novel concept doesn’t just make the dining experience more fun and spontaneous for the guests but for the chefs as well.

Beyond the ever changing menu, Kevin has also completely flipped the service model on its head.  The chefs themselves break down that “invisible wall” to the kitchen and come pitch their inspirations directly to the guests.  After all, who better to explain the vision behind the dish than the very person who invented it.  So the chefs not only make their dishes, they explain their dishes and then they serve their dishes.  It’s a complicated system but they’ve somehow figured out a way to make it work seamlessly.

Kevin’s the most down to earth “celebrity” you’ll ever meet.  He’s finally gotten used to the lack of anonymity that comes with stardom but it’s taken a while.  He was never after fame but is incredibly grateful for the good fortune that has come as a result of it.  He doesn’t take any of his success for granted, recognizing that you’re only as good as your last meal.  And how does he measure success?  It’s not the dollars and cents or the 5 star Yelp reviews one would expect.  It’s much more simple.  If at the end of the day you feel like you gave it your all and had guests leave with huge smiles on their faces, for Kevin Gillespie, that is the definition of success.