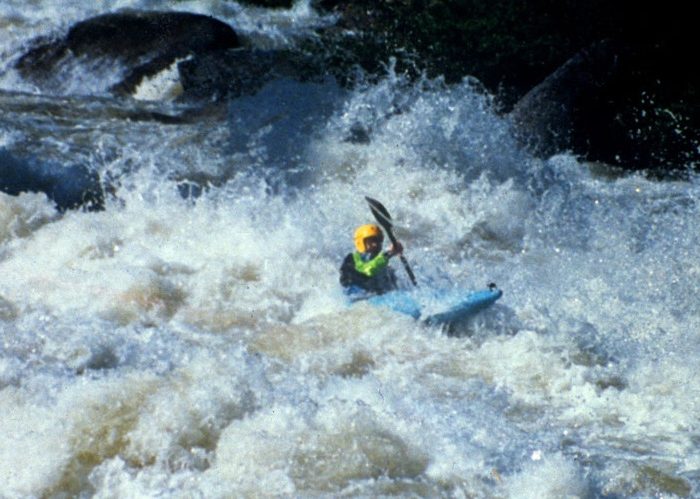 Doug Ammons is a scientific editor and researcher, a business owner, an accomplished author and filmmaker and a classical guitarist. But what he’s most known for is being an extreme kayaker.  He’s run several first descents in the US and overseas and soloed multiple challenging class v runs that most people would never touch, most famously the Grand Canyon of the Stikine.  Because of his many incredible kayaking accomplishments, Outside Magazine has named him one of the ten greatest adventurists over the last century. He has degrees in mathematics and physics and has a PhD in Psychology.

Hearing Doug Ammons opine about water being the ultimate metaphor for life, you’d think you’re listening to a philosophy professor, not one of the most distinguished adventure athletes over the last century. Then again, this is no ordinary adventure athlete.  This kayaker, who holds dozens of first descents on treacherous Class V rivers, also holds a PhD in psychology and double degrees in math and physics.

At first blush, Doug may appear to be a study in contrasts.  His thirst for running incredibly dangerous rapids that could crush you juxtaposed with his intellectual curiosity and thirst for knowledge and meaning.  But that’s not how Doug sees it.  To him, it’s all a continuum.  He is a classically trained guitarist and likes to use music as a metaphor.  He speaks of the fusion of the power, the complexity and the raw emotion of the water with the music that he loves. Kayaking is much more akin to music or even poetry for Doug than it is a thrill-seeking, adrenaline-fueled sport.

But don’t be fooled. While Doug may like to wax poetic about being on the river, elite-level kayaking is an extremely demanding and potentially catastrophic adventure sport.  Any single wrong move while navigating through explosive whitewater can have fatal consequences. And he knows this reality firsthand.  Doug has lost way too many friends on the water, friends who were highly skilled, experienced and even cautious kayakers.  Doug will be the first to admit the role that serendipity plays in one’s fate on the water.  The difference between life and death can be a matter of inches.  He has had his share of near-death experiences himself.  Even with the best training and most thoughtful planning, you can only control so much.  The river has a mind of its own and cannot ever be tamed.

So what exactly does it take to kayak at the elite level? Years and years of training for starters. Of course, that goes without saying.  But what’s really critical is that you have a “beginner’s mind”, according to Doug.  That is, an openness and readiness to learn something new with each run.  No two rivers are the same and for that matter, no one river ever looks the same with each run.  Running rivers over and over will increase one’s confidence for sure but if that confidence ever turns into cockiness, it’s a recipe for disaster.

The other critical ingredient for success on the water is the ability to be both incredibly relaxed yet hyper aware at the same time.  If you’re too tense, you’re sure to make mistakes.  But you still need to be very focused and able to react without hesitation to whatever the river throws your way.  If there’s one thing that’s predictable about the water, it’s its unpredictability.  That’s what makes it so appealing but so dangerous.

While Doug’s reflective, philosophical nature pushes him far away from the adventure athlete stereotype, there’s a very good reason Outside Magazine named him one of the ten greatest adventurists over the 1900’s.  One could easily make the argument that he has done as much for the sport of kayaking as any athlete has done for any other sport on this planet.  The unexplored runs he conquered and the way he went about them – being the first and being alone – will forever brand Doug Ammons as a pioneer in kayaking and a pioneer in the world of extreme sports.