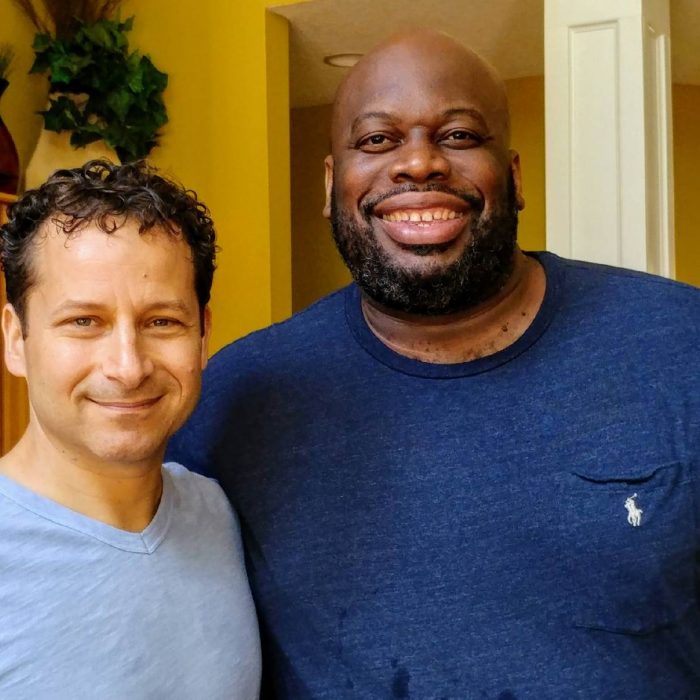 Morris Robinson is a world-renowned bass opera singer.  He has regularly performed at the Metropolitan Opera as well as opera houses all over the world.  He is also a highly regarded concert singer and has performed with many of the well-known symphony orchestras across the United States.  He is a graduate of the Citadel and currently resides in Atlanta with his wife and son.

To some, Morris Robinson can be an intimidating presence.  He’s a big and powerful looking guy. Remember Popeye’s powerful nemesis Bluto?  Sort of like him.  There is also no pretense about Morris.  When he showed up for our interview, he was wearing workout shorts, a t-shirt and sandals.  If I told you that he’s an ex 3 time all American collegiate football player, that probably wouldn’t be much a surprise.  But if I then told you he’s now one of the great bass opera singers of our generation, you’d probably do a double take.  And Morris would have it no other way.

Morris has always relished the dichotomy of his existence – a 6’3”, 290 pound aggressive offensive lineman on the one hand and a talented performance artist on the other.  Those two seemingly contrasting personas have been a part of his identity throughout his life.  Even today with his football playing days well behind him, he certainly doesn’t “look” or “act” the part of a world-renowned opera singer (not that I personally know any of them).  An image of a polished, clean-shaven and formally dressed sophisticate driving a Mercedes may come to mind but certainly not a casually dressed, scruffy-looking former athlete driving around town in a Hummer.  That’s one of the things I love about Morris Robinson – he is who he is and he makes no apologies.

So what do you do when you finally come to the realization that your lifelong dream of playing football in the NFL isn’t in the cards?  Like most of us, you do what you feel you have to do to make your way in the world.  That is, you settle.  For Morris, that meant getting a job in corporate sales for a technology company.  That is what he did for seven tedious years until he woke up one day and felt empty inside.  Despite his success at it, the passion just wasn’t there.  He knew deep inside that it wasn’t in God’s plan for him to spend the rest of his days toiling away in corporate America.

His wife Denise also noticed that the spark was missing which is why, unbeknownst to Morris, she had secretly set up an interview for him at the prestigious Choral Arts Society of Washington.  The Director fell in love with his beautiful voice upon the very first note.  And that’s all it took for Morris to embark upon a new journey to rediscover this remarkable gift he had always had but which had laid dormant for many years.  It wasn’t so obvious at first how he could leverage his vocal talent into a career but that was beside the point.  Corporate sales had become a grind and he needed some excitement in his life.  With singing, he got just that.

With a voice as naturally sweet and powerful as his, it didn’t take long for Morris to get discovered.  But the road from salesman to opera star wasn’t an easy one. Talent notwithstanding, becoming an opera singer meant going back to school, both literally and figuratively.  He had to relearn how to sing operatically.  He had to learn how to act.  He had to learn multiple foreign languages (most operas are in Italian and German).  And he had to learn how to take critique. And lots of it.  While he had the advantage of a beautiful voice, singing opera is not something you just do.  It would be years of hard work and sacrifice and swallowing his pride to learn this difficult craft and make it as a professional opera singer.

So why did he do it?  Why did he decide to take this risk and essentially start over when he was already well ensconced in his corporate career?  Because according to Morris, “If you have a dream, you have the right to go after it.”  And he believed in himself.  His attitude from day one was that if someone else could do it, then he could do it too.  In his heart of hearts, he knew that if he wanted something badly enough and was willing to truly devote himself to it, he could accomplish anything.  No goal would be beyond his reach, even if that goal were as bold and audacious as becoming a world-renowned bass opera singer.