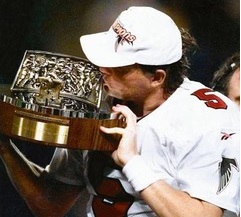 Morten Andersen is a former professional football kicker who spent most of his career with the New Orleans Saints and Atlanta Falcons.  He played in a record 382 games during his 25 year career and is the all-time leading scorer in NFL history with 2,544 points.   In 2017, he was inducted into the Pro Football Hall of Fame.  These days Morten is a motivational speaker and also oversees his family foundation.  He resides in Atlanta, GA.